A Guide to Trackers

For those of us using conventional DAWs for music making, trackers may appear to be a dark art - complicated, unrelatable, and overwhelmingly data-driven. This numerical method of making music has been around since the late 1980s; fueling everything from a burgeoning jungle scene to video game soundtracks, and from the incendiary break beat chaos of Venetian Snares to the LSDJ chip music movement. 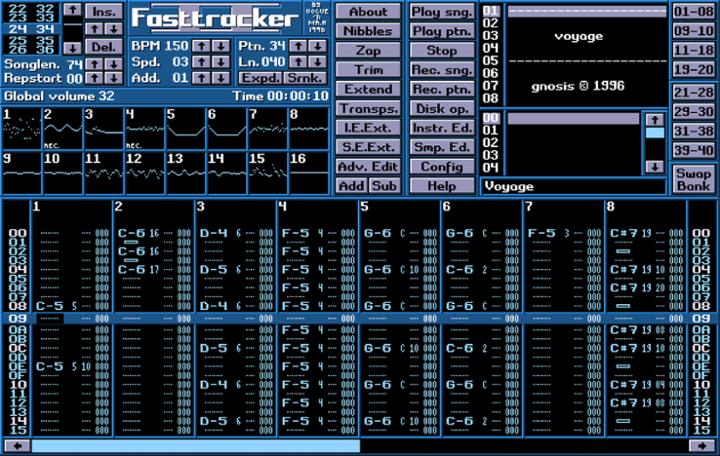 You could easily liken their appearance to the Matrix; with frantically descending characters unfolding in real time - so, what's the appeal of trackers?  We've seen releases like the Dirtywave M8, Polyend Tracker, and NerdSeq all bring tracking to the hardware world with numerous modern incarnations in software form. We're going to take a look at their Amiga origins and find out what parallels we can draw to conventional methods of making music. All your base are belong to us!

Tracking Back
The first Tracker was Ultimate Soundtracker, released in 1987 on the Amiga 1000. It was made by Karsten Obarski and could (utilising the Amiga's 'Paula' sound chip) playback four channels of 8-Bit PCM sounds at 29kHz. Tracks were saved in the MOD format, consisting of notes, their timings and effects data only - making for an exceptionally small file size.

Ultimate Soundtracker was embraced by the demoscene to create what became known as chip tune music as well as the first sample based music on a computer. This track is pretty phenomenal when you consider the four channel restrictions. Trackers are lesser known for but more than capable of sample playback from real world instruments:

Attack Of The Clones
With the rise of Ultimate Soundtracker, a number of clones appeared. Some notable releases include Pro Tracker (1990), OctaMED (1989), Fast Tracker (1993), Screen Tracker and Composer 669 (1992) - the latter of which was the first tracker which supported samples larger than 64Kb! The full history of trackers dating back from 1985 to the present day can be found here.

Trackers could commonly trigger external MIDI devices too - here's a quick look at Urban Shakedown/Aphrodite talking about using his Amiga for music:

Calvin Harris reportedly started making music on Amigas, and you'll find many early Jungle and Drum and Bass tracks were made on them.

Power PCs & Beyond
With PCs came more processing power which freed the tracker from channel and sample size limitations. The Adlib FM sound chip was initally the standard, but with the advent of more sophisticated music software came the need for outsourced sound processing. The Gravis UltraSound card (1992) came with a massive 32 channels of audio; 14 of them at 44.1kHz sample rate!

Notable trackers for PC were ScreamTracker 3 (16 channels, 1993), Fast Tracker 2 (16-Bit samples and mouse control in pre-windows days, 1994), and Impulse Tracker (a whopping 64 channels, 1998) which Infected Mushroom told me they started out on. The relatively new kid on the block, LSDJ was released in 2003 for Nintendo Gameboy and was the first portable system to host Tracker music making on the move. 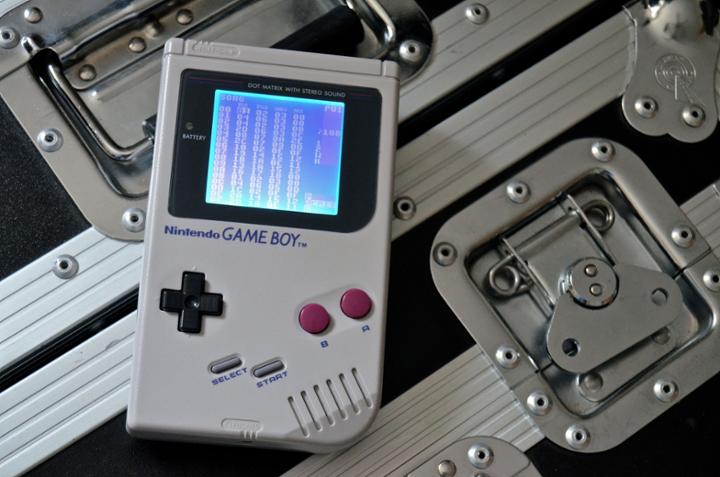 MOD files were even used for some video game soundtracks before the advent of the CD ROM, Direct X, and MP3s meant the mass market desire for them largely disappeared. Many trackers today have been developed to host VST instruments as well as trigger external MIDI instruments and play back samples - Buzz Tracker and Renoise being the most prominent examples.

Inside A Tracker
We may have been put off when someone mentions "programming" a track, it sounds a bit heavy. You are indeed closer to coding a track here than by other means, but there are some advantages to this method of music making and numerous resources available to help learn them. Let's look at what's inside: 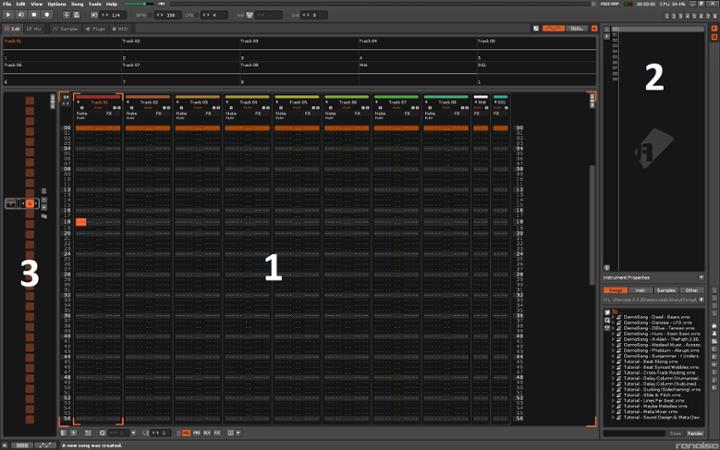 The main screen we have is the Song Screen (1), where all of the tracks reside and you'll see data gloriously flying around on playback. The Instrument Panel (2) houses all of the samples and instruments within your song - these are your sound sources, so you can view it as a kind of "project pool" in modern terms.

Trackers use Patterns (3) to form sections of a song rather than specifying line after line - these patterns form groups of the tracks together; making it simple to arrange chorus, breakdown, and intro sections. Some trackers like LSDJ and NerdSeq have the ability to Chain patterns to make up larger sequences of patterns, if you want for example, a longer chord progression.

Nowadays, we mostly opt for the mouse to do much of the navigation within a DAW, but Trackers started off when the keyboard was king! They're therefore known for extensive use of keyboard shortcuts, for quick, repeated actions. Find the shortcuts you need for your tracker and you won't look back!

Key Components
Trackers share a core set of features with equivalents in any other DAW:

All of the instruments and samples are sequenced in a track and are displayed in lines made up of the notes, instruments, and effects together. As the song is played back each line is triggered from top to bottom. A track row may look something like this:

The final two digits are connected:

0A is the effect parameter (eg. Panning, Volume, Vibrato)
04 is the value or amount of the effect

You have the ability to alter any of these values as you wish, to control individual note volume, panning, offset or even alter the instrument from one note to the next! On a later line we might write:

So, four steps later, it would play an F# in octave 4, changing the instrument/sample to something else and altering the effect parameter to a higher number, perhaps to pan to the right.

Song data will define the tempo of the track, as well as the number of lines we have per beat for alternative timings and various other settings depending on the tracker.

The Effect Column
This tells the tracker what effects (if any) to apply and to what degree - a simple example would be for changing volume or panning position. Alongside each note you can place a parameter and value in the corresponding row to alter them. You'll find the Fast Tracker 2 effects listed here, below we have some from Renoise, handy for their use of the full character set:

Effects are defined differently between trackers, and are most commonly referenced in hexadecimal numbers (see below). They can include note slides, offsets, pattern breaks, sample start point, vibrato, arpeggiation and many more parameters. In some cases the effect value is split, for example with tremolo - the first digit being rate and the second being depth.

Many modern trackers also have master track effects for processing the entire mix, most relevant for use with VSTs. For those who use Renoise, a handy quick reference card shows all the available effect parameters and their ranges as a desktop image or printable document.

IDM features much of that glorious start point automation, as demonstrated by Mike Paradinas on the snares and hats in this track:

Hexadecimal
Trackers tend to use Hexadecimal numbers for counting. The beauty of this is we can count to a high figure (255) using only two characters - the downside is it might initially tie your head in knots! It's not such a high-brow concept: in decimal we count in groups of ten (10, 20, 30, 40, 50...) whereas hexadecimal counts in groups of sixteen using the additional characters of A B C D E F:

And so on until we reach FF which is 255 in decimal. The Dirtywave M8 has a handy hex table to aid the conversion - you will eventually find it becomes second nature. If you want to automate something like a sample loop point from 0-255, it's useful to know some key hexadecimal points:

Limitations
The limitations of trackers brought some ingenious musical programming. So many of them were limited to four tracks that melodic notes and parts would be placed on any given track to expand a sequence. Arpeggios were used to simulate chords, which grew to begin the chiptune sound.

Effects like echo had to be programmed too - with diminishing volume values placed on notes to simulate them fading away. Sampling was as limited as it was with the early era of Akai/Yamaha/EMU samplers, meaning that break beats would be pitched up to save memory - and pitched back to normal tempo when played back, which ultimately gave them a characteristic crunchy sound. Other sounds would be repurposed over numerous octaves to save on space - using a Tom for an electro perc at one end and a sub at another!

Panning a sound hard left and right could create a pseudo-audio-excitement effect without any other processing, and PWM (Pulse Width Modulation) gave rise to some immensely big sounding synths and Reece-esq basslines.

Tracking Out
There are numerous reasons to admire and employ the use of trackers - it's a fresh take on how we see the visual representation of music - allowing us to focus more on the sound than the progress of a time line. The format also rewards ingenuity and offers a great deal of dexterity; not to mention the efficient, instinctive nature of programming a track.

Artists like Pete Cannon are still using Amiga trackers like OctaMed to incredible effect and there is much to be said for giving them a go. Many trackers are free, open source and widely available to try and may give you a new slant on making music.

What are your experiences of using trackers?

Are there any resources you'd recommend?