Owning your first synth is a feeling and experience you'll always remember. There's something about opening that fresh box and revealing a real tangible synthesizer in front of you; shiny and new - with a (let's face it) temporarily redundant manual flopping onto the floor as you rush to plug it in. For me, this happened with a Novation A-Station in the early 2000s. Since then, it's been a synth-fueled exploration, where they come and go - with that particular synth staying in my rack and being returned to over the years with an ever greater understanding and, dare I say it, sense of companionship.

We're going to take a look at what we consider to be the best first synths to get, given hindsight, a smidgen of knowledge and zero pre-release hype (which we're all guilty of getting sucked into now and again). We'll be looking at all-in-one solutions, with some prerequisites that it must have a keyboard or input method, as well as being diverse in what it can do  - see the list of notable mentions at the end for some recommendations if you have a MIDI keyboard and other gear already. Okay, get your cheque book out... maybe bring your contactless card just in case, let's buy our first synth!

Korg Volca FM
Starting small, we have the Volca FM; a genuine pocket powerhouse which brings the joys of 6-operator FM synthesis to... anywhere you are! Back in the early 1980s when FM synthesis came into homes and studios, it was in the form of sizable metal enclosures or rack mount black boxes with push buttons for controls. This is a small, battery-operated synth, with 3 note polyphony (up to 3 notes playable at a time), a built-in sequencer and actual knobs to twist, turn and even automate - a revelation for FM synthesis! You will be in awe at the range of sounds it produces. Load classic patches from the DX7 and this little beauty will sing for you like it's 1983! 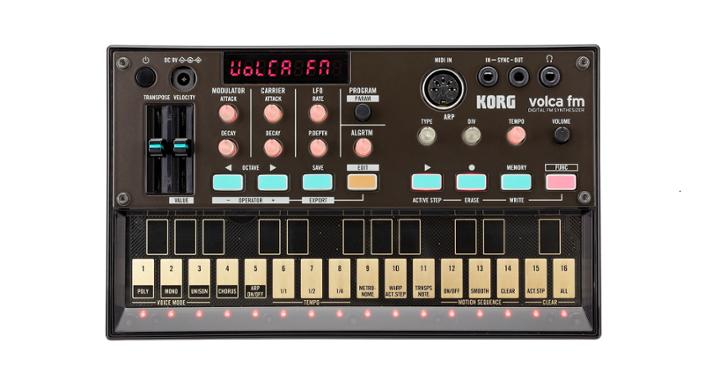 A three-voice digital FM synthesizer with a sequencer, arpeggiator and MIDI input. RRP: £130

Here's the introduction video from Korg:

Behringer MS-1
The SH-101 from Roland is one of the era-defining mono-synths (only one note can be played at a time) to come out of the 1980s. Everyone from Vince Clarke (Yazoo, Depeche Mode) to Liam Howlett (The Prodigy) swore by them, and now Behringer has brought an unbelievably authentic (some may say audacious) replica to modern audiences. This is beyond a mere copy or emulation of the original; it's the real deal, complete with a sequencer and modern connectivity. Once you hear the punch and squeal of the MS-1, you may find it hard to put down. A truly magical and infectious sound for a fraction of the original's resale price. 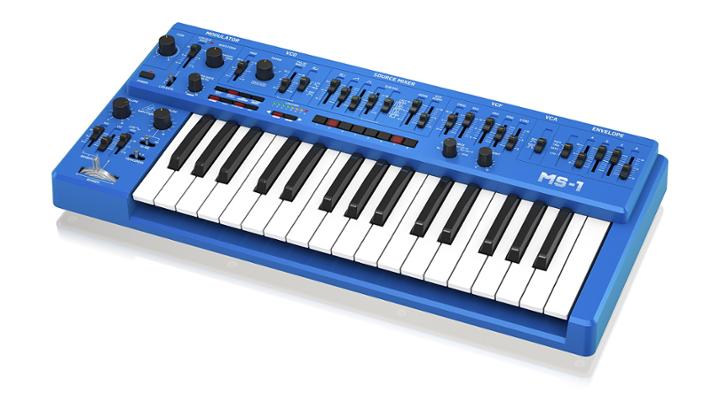 Here's loopop comparing the original to this modern version:

Moog Werkstatt
If you've ever wanted to own a Moog but have been put off by the price tag, the Werkstatt - 01 is 100% worth considering. What it lacks in size, it more than makes up for in sonic dexterity; giving you the big bass and searing lead sounds Moogs are renowned for in an implausibly small enclosure. A bonus is it's available as a kit, so you can, in some respects, build it yourself and inspect the circuit board city within! The keyboard is a little bit fiddly, but in synthesis hearing is believing, and for that reason alone the Werkstatt has to go on this list - a perfect introduction to simple but spectacular hardware sounds.

Here's DIVKID demoing the newer model which comes with a CV sound expansion as standard:

Arturia Microfreak
Synths can 'speak to you' at first sight, giving you a sense of what they're all about - some orderly and refined, some oozing a sense of fun, encouraging exploration and generating a hypnotic excitement. The Microfreak is the latter - delivering a look and sound of wild enjoyment and range - loaded with features, multiple synth engines and audio effects to aid what some call sound design, but could equally be called creative exploration or simply mucking about! The Microfreak is a hybrid synthesizer which draws from the best of both synth worlds for one of the most unique and truly refreshing approaches to synthesis available. The odd flat keyboard may take some getting used to but the capacitive touch capability is incredibly versatile and fun. 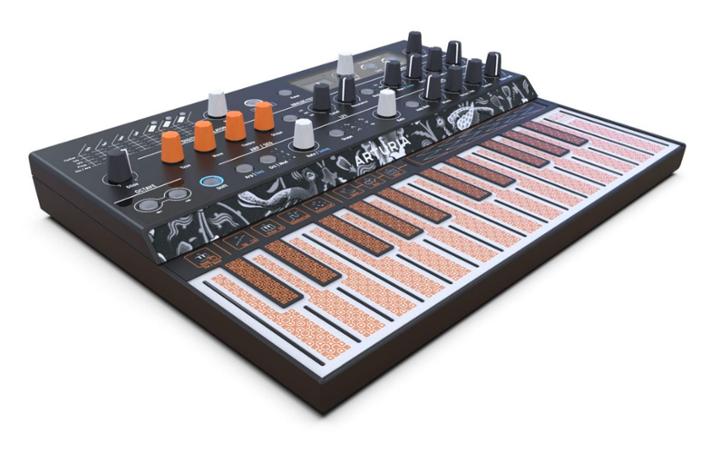 The official Arturia video on the Microfreak:

Novation Circuit Tracks
The Novation Circuit has grown into a number of innovative groove boxes which will allow you to make entire tracks in one place. The Circuit Tracks has two polyphonic digital synths to play, tweak, and record - alongside four drum tracks to sequence drums and percussion. Novation are adept at converting the traditional keyboard layout to an illuminated square matrix, using RGB LEDs to indicate the musical scale. The fact that it can be powered by batteries and has velocity sensitive pads makes it an attractive and compact mobile MPC (Music Production Centre) for taking anywhere. While it may be a handful for beginners when compared to others on this list, it'll give you all you need in one place - and will reward you with many transferable music- making skills. 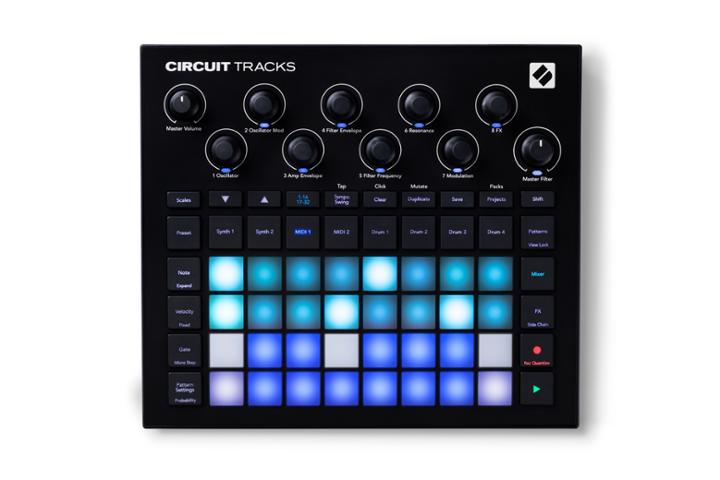 Here's an overview of what the Circuit Tracks can do:

Pocket Operator KO
A wildcard entry, as in reality, this is a sampler - not a synth. However, in terms of being a potential first device to make music with, particularly for kids, it's hard to recommend anything else! The Pocket Operator series have been a huge success for the Swedish company Teenage Engineering, with a myriad of individual adventure-game-inspired designs housing exceptionally high-fidelity and intuitive music devices. The KO allows you to  record your voice, sounds of the kitchen, or your cat - and sequence them in seconds with 16 frenetic effects to process the onslaught. It has a microphone and a line (instrument) input so it can record, playback, and pitch up all kinds of things - with equally hilarious and inspiring results. Highly portable and well built, the whole PO range is a great entry point into music making. 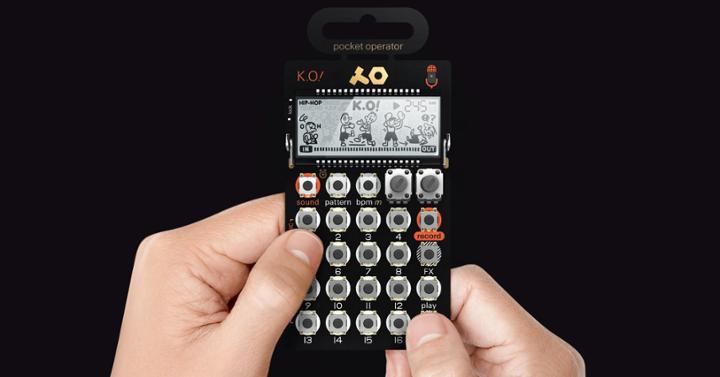 Andrew Huang takes a look at what it can do:

Notable mentions:
We can't write about all the amazing synths out there, but let's look at some alternatives which might also float your boat. If you want something affordable, portable and powerful the Stylophone Gen X-1 is a good way to go, with analogue oscillators and a lovely digital delay. Likewise, the Modal Electronics SKULPTSynth SE and IK UNO synth will give you wide ranging tabletop synthesis, which sound lovely - as does the new Korg Nu:Tekt NTS-1 - a small, programmable synth capable of hosting wide-ranging synths engines and audio effects. For the more adventurous, Elektron offer the Modal:Cycles unit which will give you a rich and solid entry point into music making through accessible FM synthesis and the Korg Monologue has 25 keys  to trigger a real analogue synthesizer from a sleek and fully-featured unit.

Finally, if you already have a MIDI keyboard or sound card to link up, I highly recommend investigating the Behringer Neutron with it's pure analog signal path and big sound, the Roland Juno JU-06A for the glorious Juno tones and, how could we not mention the TB-03 Bass Line? A modern replication of the guitar player's accompaniment which became the inspiration behind an entire movement of electronic music. 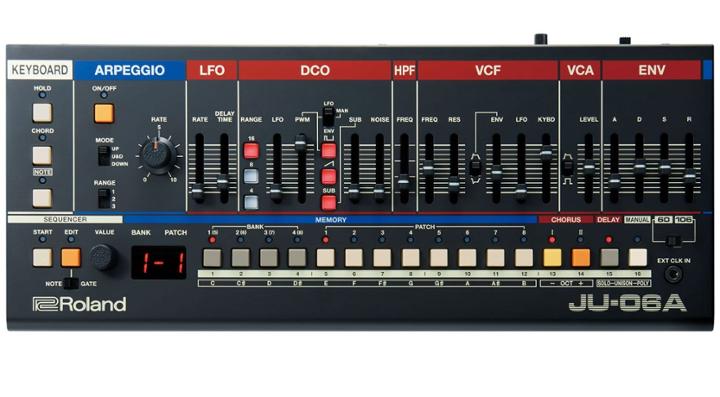 That's it! We hope you found some inspiration in there, like with many things, this is all about what feels right for you - so go to your local music shop and try them out if you can. See what sits well with you - you'll always find one synth speaks to you more than the others, please let us know what it said!

What was your first synth? What made you buy it? Do you still have it?