We've posted a video of Dave Rossum demonstrating his new modules at the show, but here's the full details of each as seen in the company's press releases:

Rossum Electro-Music EVOLUTION Variable Character Ladder Filter
At the core of Evolution is Dave Rossum's enhancement of the iconic Moog ladder filter from the original E-mu Systems 2100 LPF module (which, incidentally, Dave counts as his favorite sounding of all of the analog filters he has designed).

For Evolution, Dave has designed new capabilities that not only allow users to dial in all of the outstanding qualities of the original 2100, but combine to let them create the sonic characteristics of a wide variety of other filter types.

Taken together, EVOLUTION gives you everything from the platonic ideal of the classic ladder filter to a vast selection of alternative filter characteristics.

Like all Rossum Electro-Music modules, Evolution is solidly built, with machined aluminum knobs and high quality components throughout. 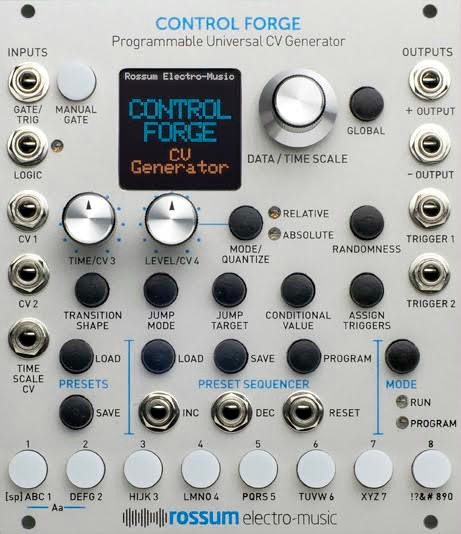 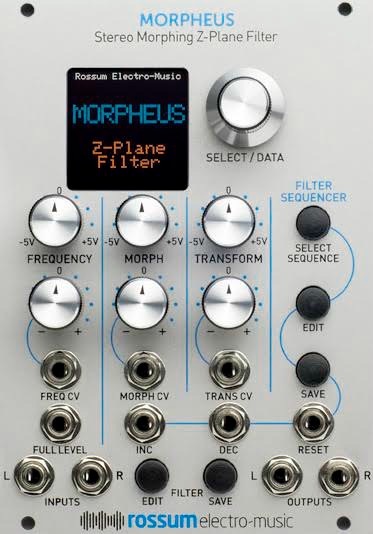 Rossum Electro-Music MORPHEUS Stereo Morphing Z-Plane Filter
Based on the groundbreaking 14-pole Z­-Plane Filters that Dave Rossum invented for the E-mu System's Morpheus synthesizer, Rossum Electro-Music's Morpheus Eurorack module includes over 190 filter configurations. Each configuration is composed of up to 8 complex filters that one can picture as being at the corners of a three dimensional cube. Morpheus then gives users the ability to smoothly interpolate between those 8 filters within the cube's three dimensional space.

Due to processor limitations back in the day, the original Morpheus was capable of real-time morphing between filter configurations in only one dimension. Interpolation in the frequency and transform dimensions were set at note-on and remained static for the remainder of the note. But even with that limitation, Morpheus offered sonic capabilities that are unmatched to this day.

With Rossum Electro-Music's new Morpheus module, musicians and sound designers now get simultaneous real-time manual and CV control of all three dimensions, for dynamic timbral effects unlike anything ever heard before.

With one or more Satellites, Control Forge owners can take advantage of all of their presets and sequences in multiple cabinets or even different systems

Multiple Satellites can be programmed from the same Control Forge and synced together via their Gate inputs to create complex polyphonic sequences and modulation contours.

More From: ROSSUM
Even more news...