We have a wealth of high fidelity apps and programs to make music incredibly accessible today. Join us as we flashback to the 1980s and 90s when toy keyboards were the most common gateway into the world of electronic music production! The big players Casio and Yamaha, along with other companies released a phenomenal number of portable keyboards - some even matching the DSP capabilities of sound cards of the era!

Many people saw them as toys for kids, but as the ranges developed, sequencers, velocity pads, full sized keys, and MIDI controls brought them up a level. These mass-produced but durable keyboards are still around today and remain an affordable source of battery operated beats and woozy melodies (especially when the batteries are low). Prepare to recall some pocket sized preset machines and the first home samplers - with obligatory sound names like Comet, Fireworks, and Fantasy!

Yamaha
Yamaha have released numerous high end synths and samplers including the revered CS series, the iconic DX series, the RX series of drum machines, the SY series, the TG series, the TX series and many more.Today we're going to downsize, and look at the PSS models, otherwise known as Portasound Keyboards:

In 1980 Yamaha released the first in its PSS range of keyboards, which employed a combination of basic wave shapes, wavetables, PCM samples and FM (Frequency Modulation) throughout. The first in the series was the PS-1, with a reasonably limited 4 voices and 4 rhythms on board. Here's a commendable demo using this first incarnation:

The later PSS-30 and PSS-130 are identical square wave keyboards, housing a YM2410 chip with a meager 2 note polyphony. The PSS-125 from 1989 added drums over the earlier PSS-80 and upped the polyphony to 8 notes - demonstrated below by 8-Bit Guy, showing how to do an output modification (see the end of this article for more mods):

The PSS-270 from 1986 has a 2-operator FM chip (the Yamaha YM2413)  with settings for sustain, vibrato, portamento or 'stereo symphonic' chorus effect. The PSS-140 uses the very same chip and is recognisable for its drum pads, with 37 mini keys and 6 note polyphony. Fans of the duo will find them lovingly recreated in Plogue's ChipSynth PortaFM.

Sporting the YM7116 chip, the PSS-280 was released in 1989 and was the first keyboard I played in music class, along with 20-30 others. We had immense pleasure playing the sound effect presets of the helicopter, ocean waves and passing motorbikes to each other, much to the teacher's annoyance! A circuit diagram for the PSS-280 can be found here. You'll find some free PSS-280 samples (and many more from the series) to play to your music teacher on freewavesamples.com. 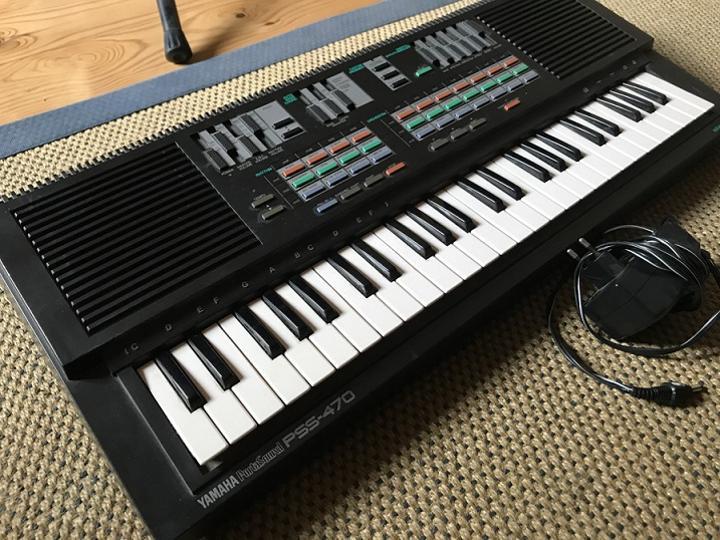 One of the most well-known and much loved lofi keyboards, the PSS-470/570 featuring a YM3812 chip, was released in 1987 and is notable for its 'Digital Synthesizer' section, opening the door to your first forays into digital synthesis before you knew it was a thing. The section features settings for Wave, Spectrum, Modulation, Attack, and Decay to craft the sound in quite diverse ways. It features stereo outputs and a symphonic chorus effect - as well as a limited drum sequencer, with the 570 version adding volume controls for individual drum elements! The 8Bit Guy even recorded the intro music for his channel using one.

Last year, we shared an extensive PSS-480 double-parter from youtuber Keen On Keys. This keyboard is based on the same architecture of the PSS-470 (YM3812), with more precise editing parameters and storage of 5 user patches until you turn it off. This unit offered a 2-operator FM synth engine with 12 voices of polyphony, MIDI in/out and a loop sequencer!  Here is part 1 covering the synth engine:

Part 2 of the video is available here.

One of the most recognisable Portasound keyboards is the PSS-780 from 1989 - with its pastel coloured velocity sensitive drum pads residing below the keyboard. This is a 2-operator FM synthesizer with parameter editing, and MIDI in and out for sequencing - it can also be edited via SYSEX messages, and a number of editors still exist today! What a monster! 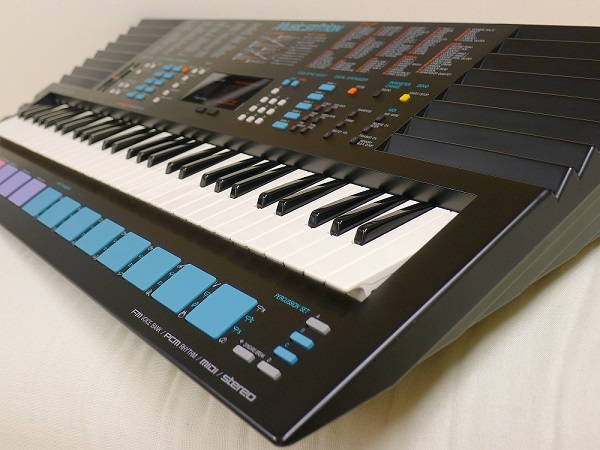 The aforementioned 8-Bit Guy has done a super overview of the Soundblaster Keyboards, for those who want to know the gory details:

For more information on the PSS series visit this page which features info on them as well as many manuals. For details on the YM chips mentioned, this website is a goldmine!

The VSS-200 was released in 1988 and offered the now customary FM Synthesis alongside sampling through the addition of an on-board mic! It features 6 note polyphony with an LFO, ADSR envelope and 9 DSP effects - a little lofi powerhouse! The effects make it very experimental, consisting of a Loop function, U-Turn (ping-pong loop), Echo, Fuzz, Reverse, AM, FM, and Level Pitch. A very capable sampling keyboard, with some cool features - now beginning to demand a high-ish price!

Casio
Like Yamaha, Casio released their own high end synths, most notably the CZ series, and they too made huge inroads into the home keyboard market with their C (Casiotine), M (mini), PT (petite) and the S series of Sampling keyboards. 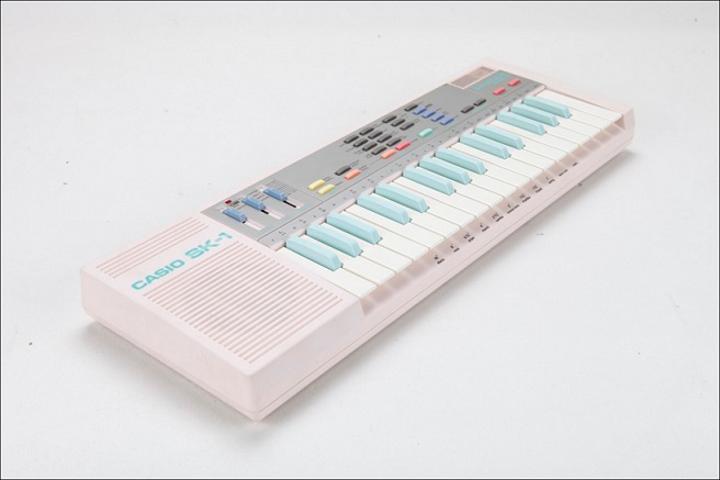 The Casio SK-1 (a rare pink model  is pictured) from 1985 is the most iconic of the lofi keyboards, notable for its sampling capabilities at 8-bit PCM, 9.38kHz amounting to roughly 1.4 seconds of sampling time and a loop option - though don't expect anything seamless! They were also released as the Realistic Concetmate 500, by Radioshack in the USA - still a stonewall crunchy classic! Here's a fantastic SK-1 reverse engineering article.

The later Casio SK-5 came with more sampling time, and the capability to sample 4 sounds as well as to retain the sounds in memory with the power switched off (when using batteries). The sampling specifics were 8-Bit 9,38KHz like the SK-1. You will still see bands like Holy F performing with one of these! 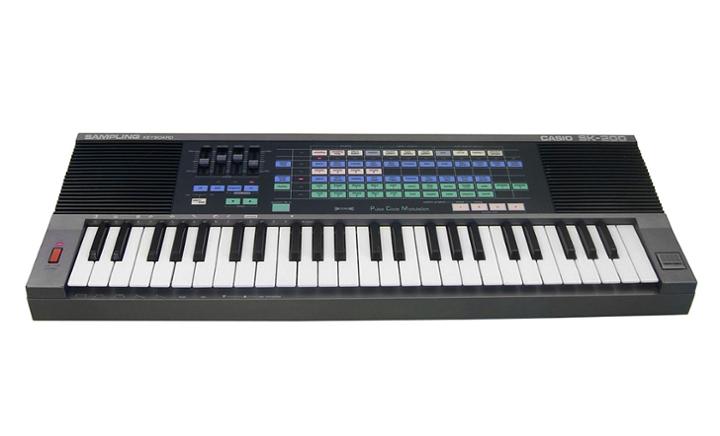 The Casio SK-200 seems to be a vast improvement over the earlier SK series, with four sample slots - each with a massive 0.81 seconds at 10.113 kHz resolution this time, with the quasi-looping mentioned above. It cost a staggering £250 upon release, and you can read a full review from mu:zines here. Believe me, it's not great, even though it does sequence the on-board rhythms with your sampled material, it's often laughable and should probably be avoided. 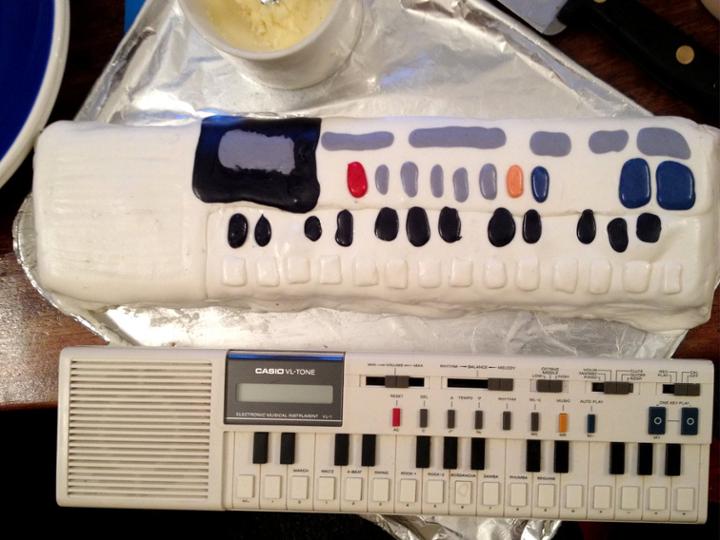 The Casio VL-1 or VLTone was released in 1979 and is one of the definitive lofi keyboards, with a fetching carry case and the ability to double up as a calculator! It has 29 button keys (reminiscent of Rolands MC-202), a  three-position octave switch, 5 preset sounds, 10 built-in rhythm patterns, a 100 note sequencer - as well as  the possibility of programming your own user sounds! No wonder it has been used on countless tracks; you'll know it when you hear it! It's pictured above with it's cakey counterpart, courtesy of Battery Operated Orchestra - tasty!

Sadly while the Casio TA-10 does have a built in tape machine, it doesn't actually record anything, acting as a payback machine for your lofi performance. As a note of compensation, here is Simon the Magpie displaying the wonderful world of cassette tape instruments:

A comprehensive list of Casio Keyboards can be found here.

The Outsiders
The Philips Personal Media Composer (PMC) 100 is another 2-operator monophonic FM synth with a membrane keyboard and a built-in cassette deck. (It's not the only lofi keyboard to have a cassette, as we've seen). Known for its slow moving and evolving pads and usable step sequencer with 8kb of RAM - it was only let down by lack of MIDI and the tape being for memory functions / playback only. 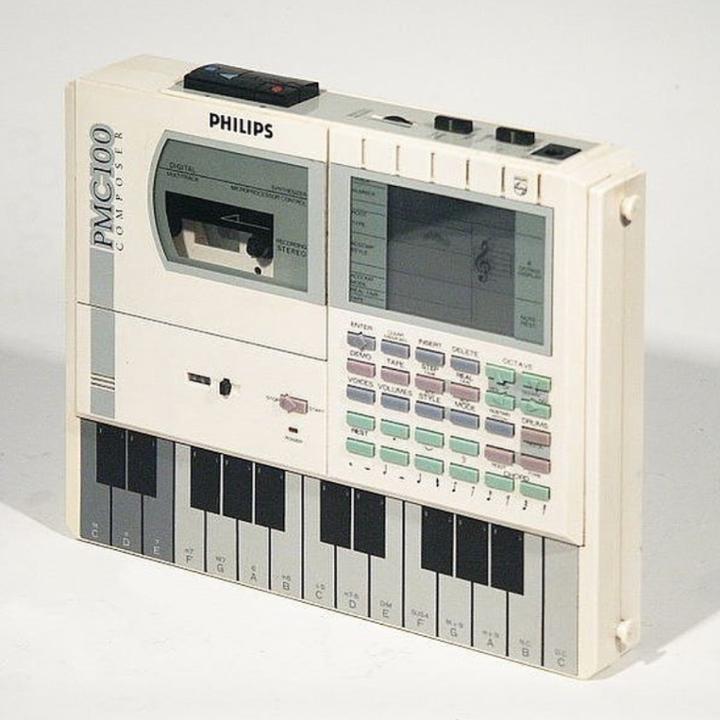 One of the most revered lo fi synths is the Hing Hon EK-001. Recognisable for it's four red drum pads, it is a charming square wave keyboard which sounds fantastic even without effects. You often find them in a nondescript white box, but believe me they are work seeking out! More information on it here.

Low Risk Modifications
Given the cost and frequency of these keyboards they've become the first port of call for modifications and circuit bending. Perhaps we'll cover that in a follow up to our Gear Modification article - but for those who need to know now, here are some universal Circuit Bending mods for the Casio SA series. You will also find some tasty MIDI Mods for keyboards without the function - using the Highly Liquid UMR2 Universal Midi Retrofit Board or by using an Arduino. Have a look at the Circtuibenders website for some inspiring mods!

There are many tutorials on adding output sockets to keyboards, here's one from Simon The Magpie on how to add audio output to anything:

Further reading on lofi keyboards can be found in this obscure and incredible Toy Instruments book. Keep your eyes peeled at car boot sales, yard sales, craigslist, gumtree, ebay or wherever you find second hand items for these vintage keyboard beauties. It'll be the least you've ever spent on a synth - and with a few guitar pedals you can make them sound like a CS-80 (maybe).

Do you use any of these today?

What lo fi keyboards did we miss?

What did you annoy your music teacher with?