We brought you preliminary news of Expert Sleepers General CV a little while back and the company tells us that the Eurorack module is now available. Here's the Expert Sleepers official press release in its entirety... 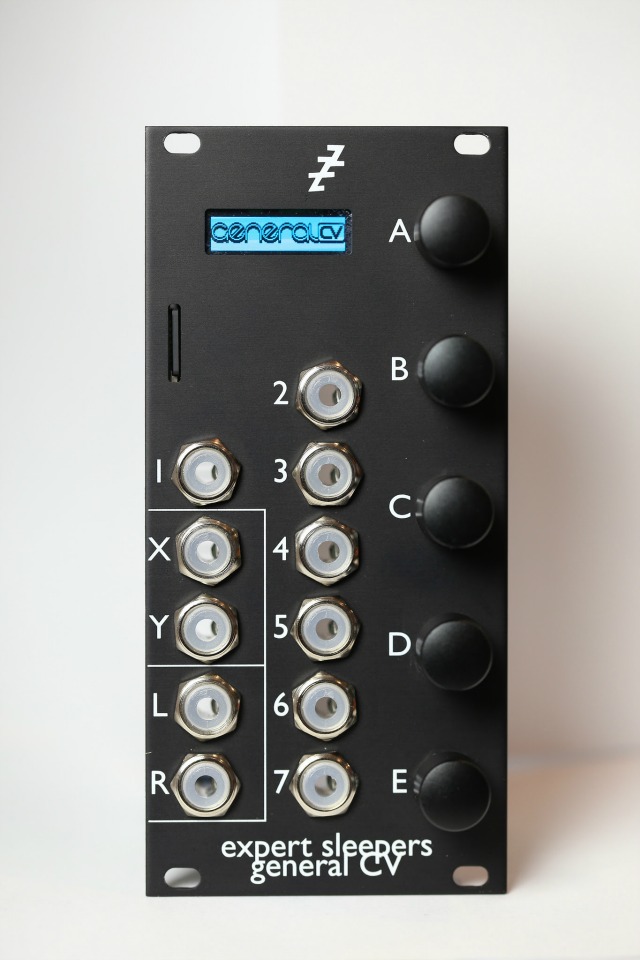 LETCHWORTH, UK: following a successful showcase at SUPERBOOTH 17 in Berlin back in April, Eurorack module- maker and audio plug-in developer Expert Sleepers is proud to launch General CV -- combining a powerful General MIDI synthesizer with a multichannel CV-to-MIDI converter alongside a host processor capable of generating huge amounts of MIDI (Musical Instrument Digital Interface) data, either from the incoming CVs (control voltages) or entirely algorithmically... and all housed in an elegant Eurorack module -- at SynthFest UK in Sheffield on October 7...

By bringing the Nineties back to the Sixties, General CV's software provides a layer of control over the synthesizer that allows adventurous users to create sounds stretching far beyond the familiar -- cheesy, even -- tones of General MIDI with which they may already be familiar. From making the synth behave like a VCO (Voltage Controlled Oscillator) to creating complex chords and textures -- even to abusing drum sounds into pitched sources, General CV brings rich pickings of fresh flavours to Euroack's a la carte modular menu.

Marrying the past with the present, General CV can also be coaxed into playing MIDI files of any Eighties pop tunes that may have been 'inadvertently' downloaded from the web. Wise to a tee, Expert Sleepers Director Andrew 'os' Ostler's outrageous General CV pitch perhaps can be taken with a pinch of (synthesized) salt. "For too long, Eurorack users have been denied important sounds, such as 'Voice Oohs', 'Orchestra Hit' and 'Shakuhachi'," says the Eurorack expert, before adding: "We're delighted to finally bring these classic tones under CV control where they belong."

But jesting apart, General CV has a number of modes of operation, including: behaving like a modular VCO, but using a massively multitimbral and polyphonic synthesizer engine as its tone source; automatically creating chords and arpeggios from a pitch CV; playing MIDI files from an MicroSD (Secure Digital) card, including special support for playing loops synchronised to a clock pulse; and acting as a drum machine with up to nine independent drum trigger inputs. Each mode also benefits from internal four-band EQ, as well as stereo chorus and reverb effects.

General CV users need not 'fly blind', however. Helpfully, a small, but perfectly formed, display screen perfectly in keeping with the 12HP module makes eagle-eyed navigation a much more straightforward proposition than the 4HP-smaller-sized SUPERBOOTH-showcased prototype preceding the finished article. "Under the hood it remains basically the same thing," its creator concludes on a more serious note: "It's a General MIDI-based module, but completely CV controlled, with a general concept that you access the tremendous synthesis power of a General MIDI sound chip, but through CV in a very creative way."

Guiding General CV creativity still further, the 'General MIDI' module follows in the footsteps of Expert Sleepers' similarly-distinctive disting mk4 -- the latest (fourth) improved iteration of its award-winning 'many-in-one' multifunction Eurorack module successfully showcased at The NAMM Show 2017 in Anaheim, California -- by also including the company's eye-catching red and blue backlit sockets... surely sealing the deal for anyone wishing to take the 1991-vintage General MIDI standardised specification for electronic musical instruments that respond to MIDI messages kicking and screaming into today's wonderful world of Eurorack with creative CV control possibilities that are out of this modular world!