Throughout its 25 year history, RME has been fully committed to a principle of flexibility - the more flexible a product, the more easily it can be adapted to new requirements. For company founder Matthias Carstens, this lies at the heart of RME's success. "The Fireface UCX II makes us proud and enthusiastic as it represents a natural evolution of our product range."

In parallel with the newly updated display, a large main volume encoder and set of buttons enable full control over the device, as well as level metering for all incoming and outgoing audio signals. The UCX II offers full stand-alone operation, with all functions controllable directly from the front of the unit - including EQ and Dynamics - as well as control over device states (clocking and sample rates) and DURec.

A secondary USB connection (labelled 'DURec') allows for the connection of USB memory sticks and external hard drives, and can alternatively be used for direct connection of RME's optional ARC USB remote control.

All of the Fireface UCX II's line-level outputs are fully DC-coupled, allowing for the sending of control voltages (CV) or Gate information to modular synthesizers (such as the popular Eurorack and Moog/MOTM/Synthesizers.com formats) and other studio hardware.

Thanks to the Direct USB Recording functionality (aka DURec), any input or output of the Fireface UCX II can be recorded directly to a USB storage device via the integrated DSP, allowing for full stand-alone recording and playback without the need to connect to a computer.

Individual tracks can be named in advance via RME's TotalMix FX software mixer, with potential applications for DURec including the creation of simultaneous backup recordings in the studio; the recording of live performances and rehearsals; multi-track field recording; or the performing of virtual sound-checks at a live music venue (e.g. via playback of a previous night's show).

SteadyClock FS allows for astonishingly high-quality AD and DA conversion, optimising both recording and playback quality, and replicating the soundstage to the fullest depth and clarity. With RME's highly efficient jitter-suppression and filtering technology, self-jitter has been reduced all the way down to the range of femtoseconds, hence the name SteadyClock 'FS'.

The Fireface UCX II comes with the TotalMix FX DSP mixer offering comprehensive level metering, routing and monitoring options. EQ and Dynamics are available on every input and output channel, as well as Reverb and Delay FX sends for enhanced latency-free monitor mixes.

A free companion app - TotalMix Remote - allows for full control of the hardware mixer and effects section of the Fireface UCX II via a network-connected PC, Mac or Apple iPad, including wirelessly over Wi-Fi. All settings are mirrored and updated in real-time - the entire mixing state, the complete routing, all FX settings and level meters.

In addition to TotalMix, RME's DIGICheck Analyzer is a free suite of audio analysis tools that provides Windows and Mac users with professional measurement and analysis of all digital data feeds in both directions, and with maximum precision.

The set of tools offered by DIGICheck includes comprehensive multi-channel level metering (peak and RMS); a 30-Band spectrum/frequency analyser, plus correlation meter and vectorscope; a loudness metering tool for checking against the IT 1770 / EBU R128 standards commonly found in broadcast; and a Surround Audio Scope, for surround sound level metering with extended correlation analysis, ITU weighting and ITU summing. 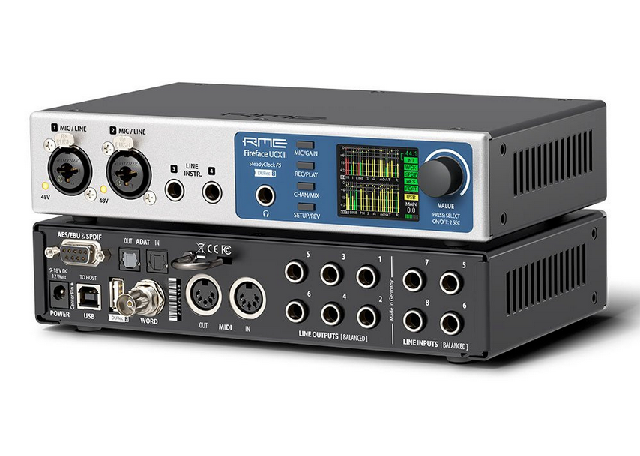 Pricing and Availability:
The RME Fireface UCX II is expected to begin shipping July 2021, with an RRP of £1149.00.

More From: RME
Even more news...