Choosing the right DAW for you is an important decision, factoring in it's technical capabilities, included features and workflow, along with more intangible requirements like aiding your creative flow and making you feel 'at home'. We're here to look at the best DAWs on the market, their most prominent features and what they might offer when it comes to making your music. You may be surprised at some of the features they've added since you last checked.

Reason first came out in 2000 and followed Propellerhead's revolutionary 909, 808 & 303 emulating combo box ReBirth. Since then the Swedish company has rebranded as ReasonStudios and offer a feature rich, open program to suit those who enjoy the hardware workflow as much as a traditional software approach.

Once limited to native devices and instruments, as well as in the box audio - Reason now offers the full recording and mixing experience you'd expect while opening its doors to third party developers. It's SSL-modeled mixing console is the closest you'll get in software to owning a fully featured high-end desk without remortgaging and the ever growing bundled library of orchestral and electronic sounds are a superb starting point. 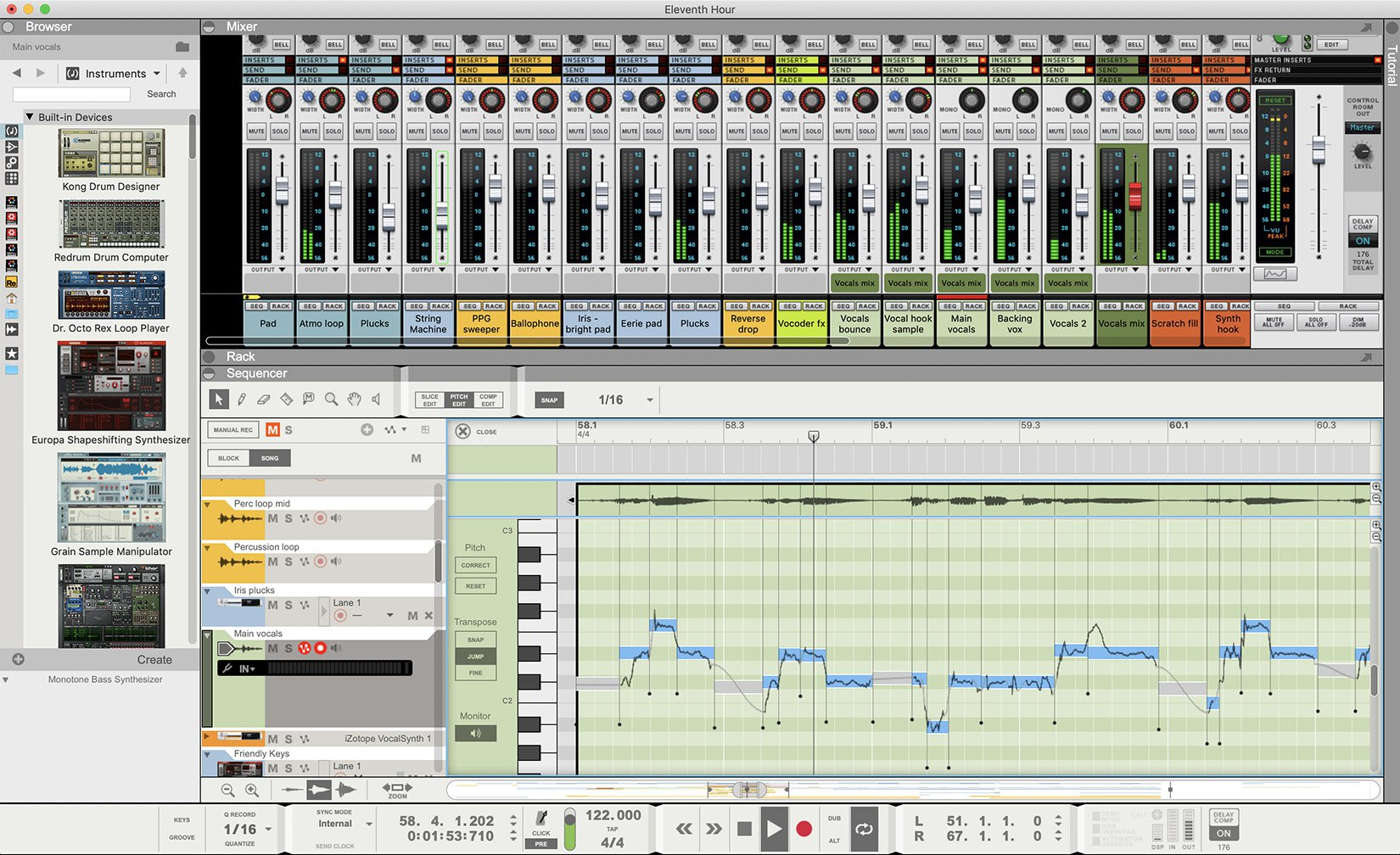 It offers a wealth of classic devices, built upon and expanded to amass a solid collection of ingenious hardware style units (in both sound and appearance) in addition to launching its own state of the art devices - such as the gorgeous Algorithm FM synthesizer.

If you started out on hardware, Reason is almost certainly the best place to start with it's signature patch cords, MPC influenced Kong object and classic step sequencing in the ReDrum.

Ableton Live recently released its 11th version, marking 20 years since it was first released. It has a clean and crisp appearance which seems a little alien until you start to 'get it', by which point you realise it's one of the most fluid and intuitive production programs out there. It's devices, instruments, clips and menus all share a universal control method you quickly become accustomed to.

It has seamless integration with real-world control surfaces, allowing for tactile changes and movements over the software environment. Hardware development from the likes of Akai and Novation alongside its flagship Push controller cater for real-world interaction which feels natural - with fluid mappings and control assignments made instantaneously. 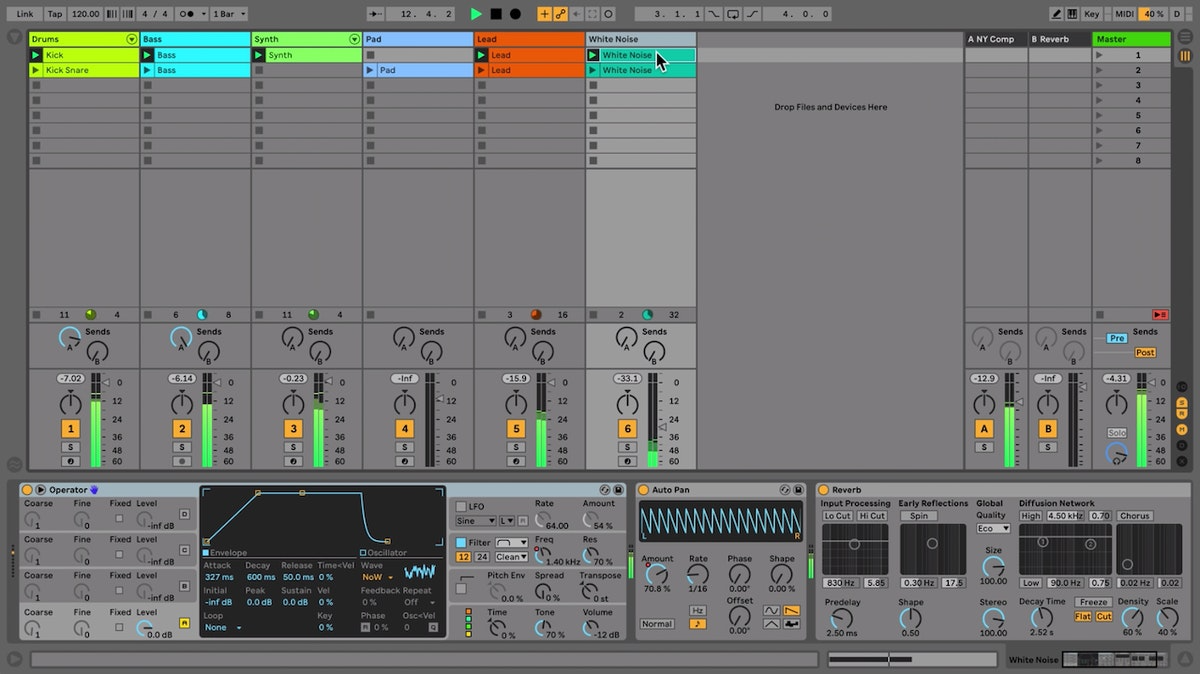 Ableton has a fast workflow, with an excellent range of ever expanding instruments, samplers and effects - with a programming powerhouse in Max4live if you want to delve into accessible audio programming, or just try out what others have made.

It's conventional left to right arrangement window is built upon with it's iconic session view, ideal for Live performance, jamming and creative bursts of sound design - a smooth and appealing choice for many producers..

The first version of Studio One was released in 2009, since then Presonus have quietly been crafting a powerhouse of a DAW; seemingly drawing together the best features of other programs and housing them in one place. It's a good shout for singer/songwriters with numerous features for multiple takes, harmonic editing and super fast audio exporting in situ. It also follows Reason's Kong by having a dedicated MPC style drum device, allowing for minute tweaks and practical changes to individual hits. 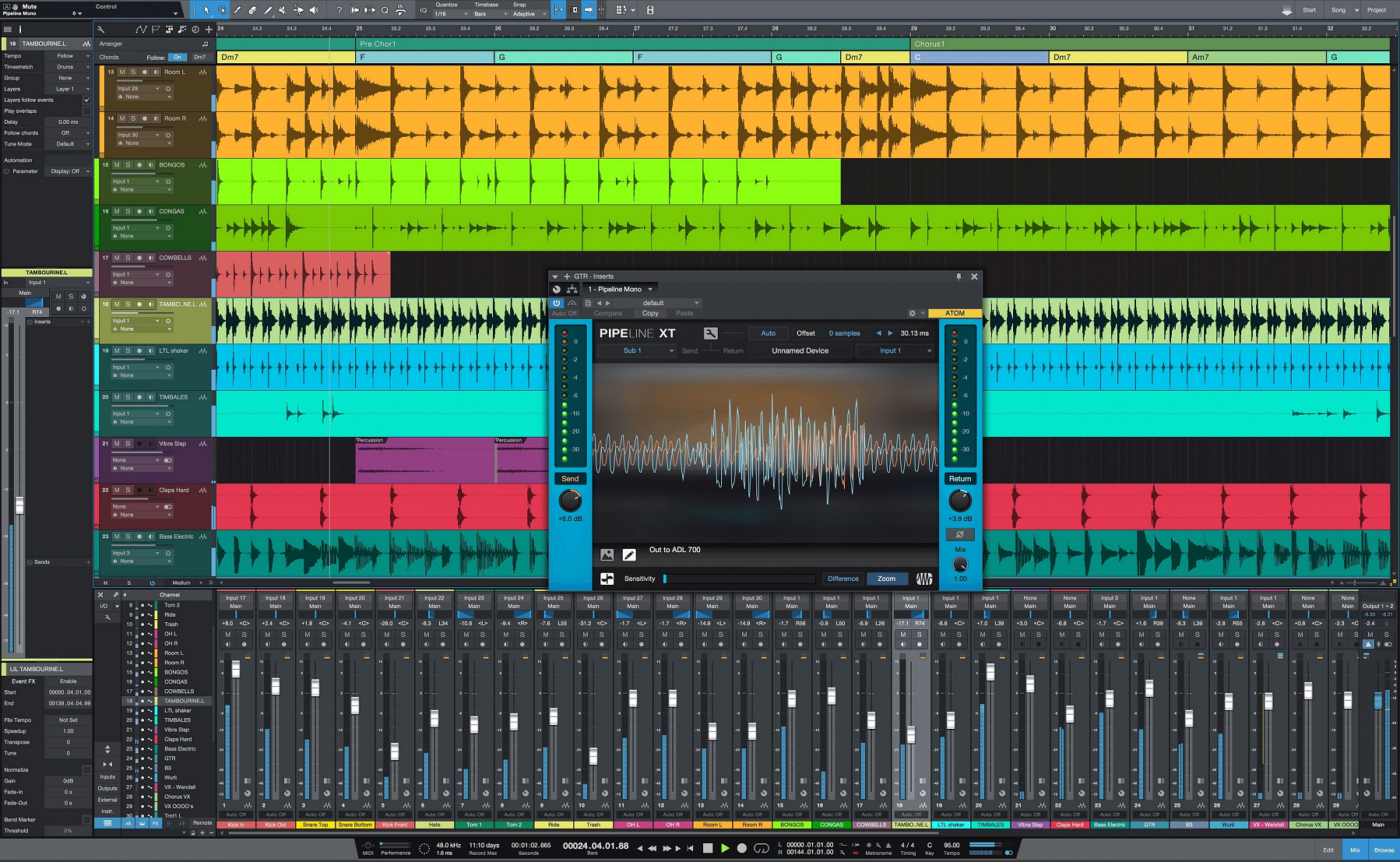 Its three distinctive windows (start, song and project) have been added to with the new show page - which splits up a setlist into functions relevant to each subsequent track. For those who perform live, it's a powerful feature which gives you a dedicated space for the controls you need. It also features a score editor for composers, based on PreSonus's Notation software.

Studio one is an excellent all round option with plenty of flexibility for electronic and acoustic led producers, as well as singer songwriters.

The first version of Cubase was released in 1989 for the Atari ST and while it was MIDI only, it was hugely influential at the time. It certainly has led the field for years with many of its competitors taking inspiration from its core elements, features and functions. Cubase has expanded too, with a vast library of devices, sounds and effects, making it one of the most fully-featured DAWs available. 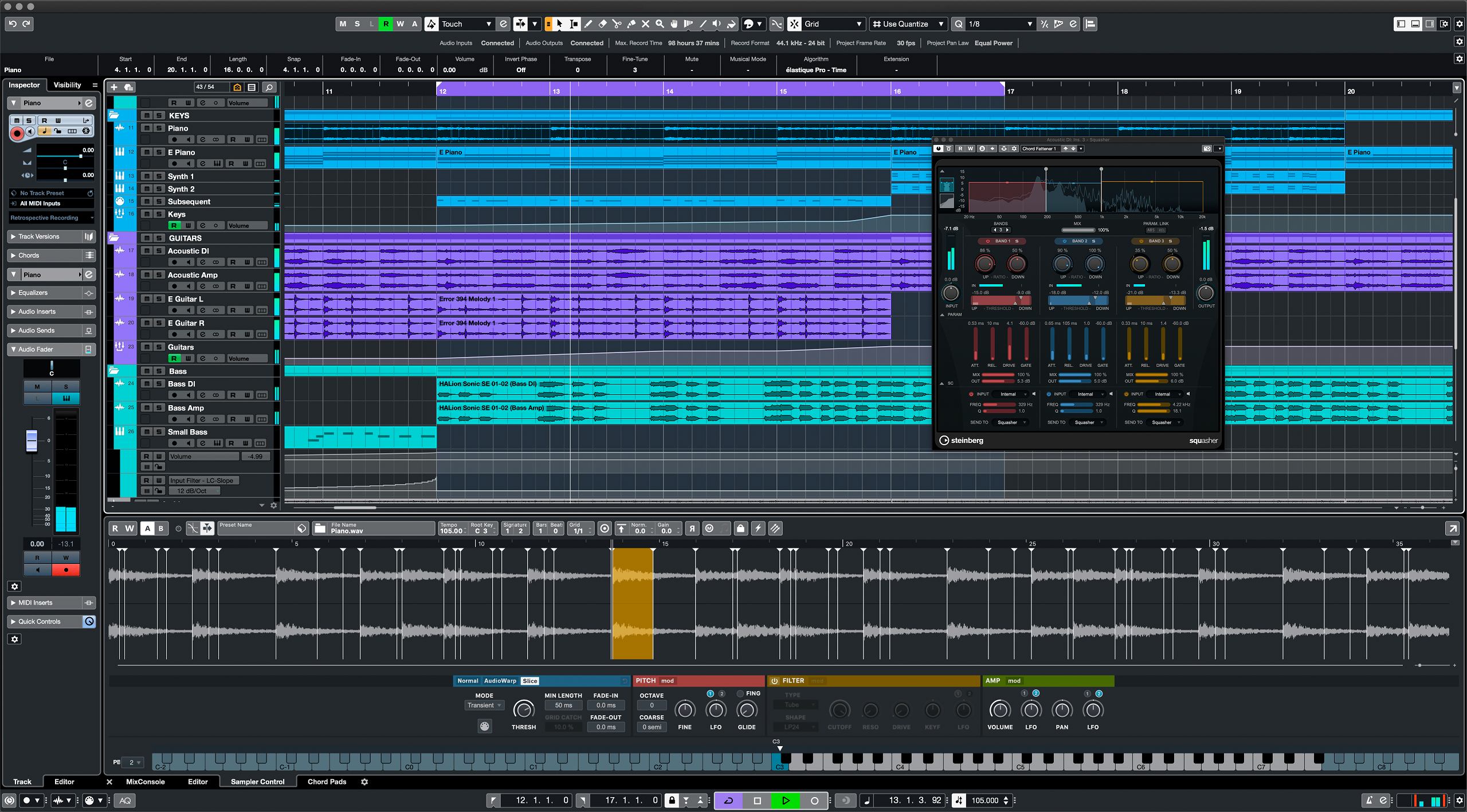 Cubase has always been a strong choice if you have outboard gear, with its ability to set up and route audio and MIDI tracks, automate changes and edit details with speed and accuracy. This is built upon with its Retrospective Record, Chord Memories and Scale Mode features which utilise much of the building blocks and fundamentals of music production to give you a helping hand.

Steinberg's flagship DAW allows you to navigate multiple tracks within a project using keyboard shortcuts, making it a prime choice for composers working between multiple templates. It's VariAudio feature offers vocal editing and pitch changes for individual notes, akin to Melodyne in-the-box, with a range of high-quality plugins and effects which both look and sound excellent. It's ability to import video files within projects also lends itself to film scoring and composition.

Cubase is favoured by all kinds of producers, from old-school gear heads to feature film composers, and it retains the great elements it's built upon to be one of the most powerful daws on the planet.

Logic started life as Notator Logic in 1993 on Mac only, with later versions being made available on Windows as well. Ever since version 9 Logic has been Mac only, where it's been fully integrated with a sleek, clean look you'd expect on a mac and boasting a wealth of sounds, processors and features for audio and MIDI.

Its sampler and quick sampler are solid and simple to use, with backwards compatibility for EX24 patches, the ability to organise a number of samples quickly and apply round robbins to a group. Its Mainstage and Logic Remote features give you professional access to your projects during live performances and shows, offering a discrete but powerful setup on stage. 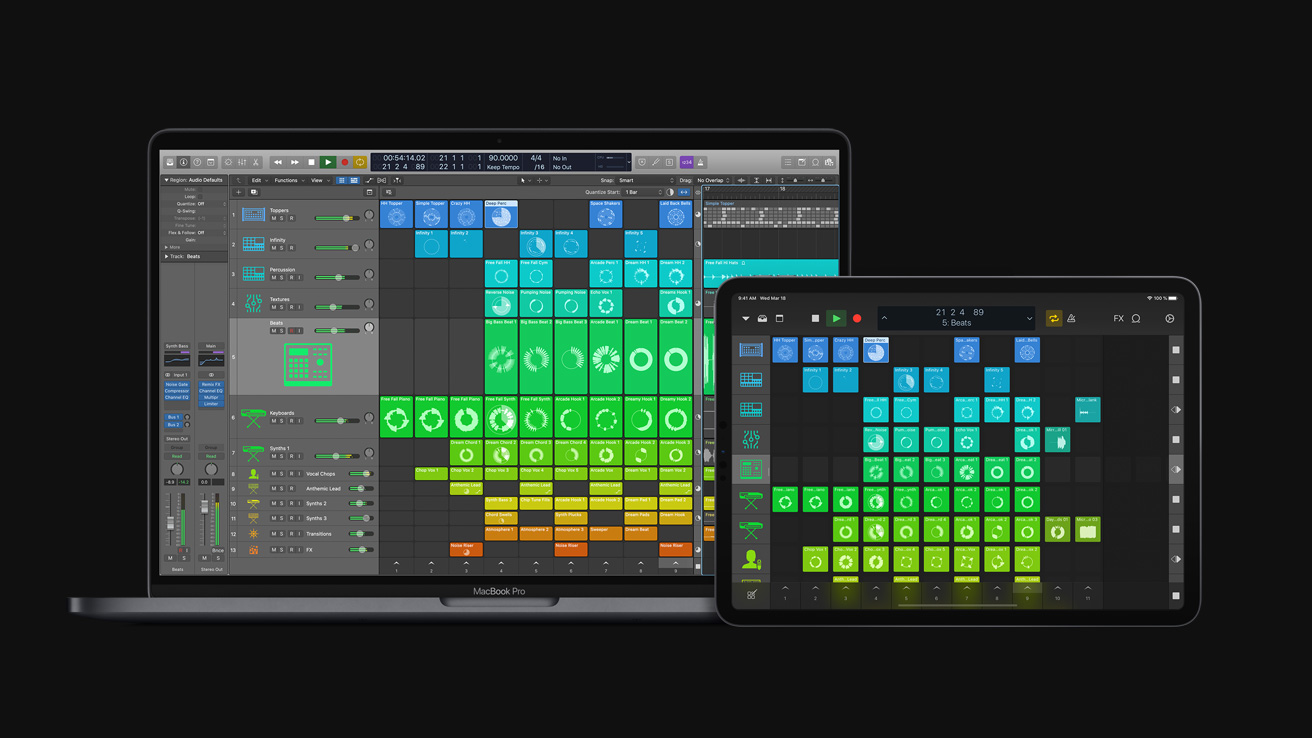 Logic has an admirable backwards compatibility (going back to version 5) as well as support for Garageband projects, extensive features for surround sound and a new launch window which takes influence from Ableton's session view. It'll also import movie files in quicktime formats which place it well for composers and soundtrack artists.

Logic is where many technical producers go to make music on Macs, largely down to its reliability, wealth of high-fidelity sounds and depth of automation - if you've started on Garageband it feels like the most ...logical progression.

Starting out life in 1997, FruityLoops quickly established itself as a high quality and fruitful creative space. The initial appeal to Image Line's DAW  is the way it looks; drawing in many newcomers with a fun and inviting aesthetic, featuring pre-rendered controls, colorful animated displays and a high speed workflow. Many producers see it as the fastest environment to get ideas down, with a step sequencer forming the focal point - where one hits, VSTs and piano rolls can be loaded and formed into various patterns for arrangement.

Image Line offers a lifetime free of upgrades which is admirable in a world where subscription models have sadly become favourable for big companies. It's quick and solid editing features make it easy to arrange, re-pitch and harmonise melodies; one of the reasons it's popular among EDM producers. Its built-in synths and effects have proven to be a strong point too, as well as the magnetic modular environment windows, which feels like you have more choice of what to focus on that other DAWs. 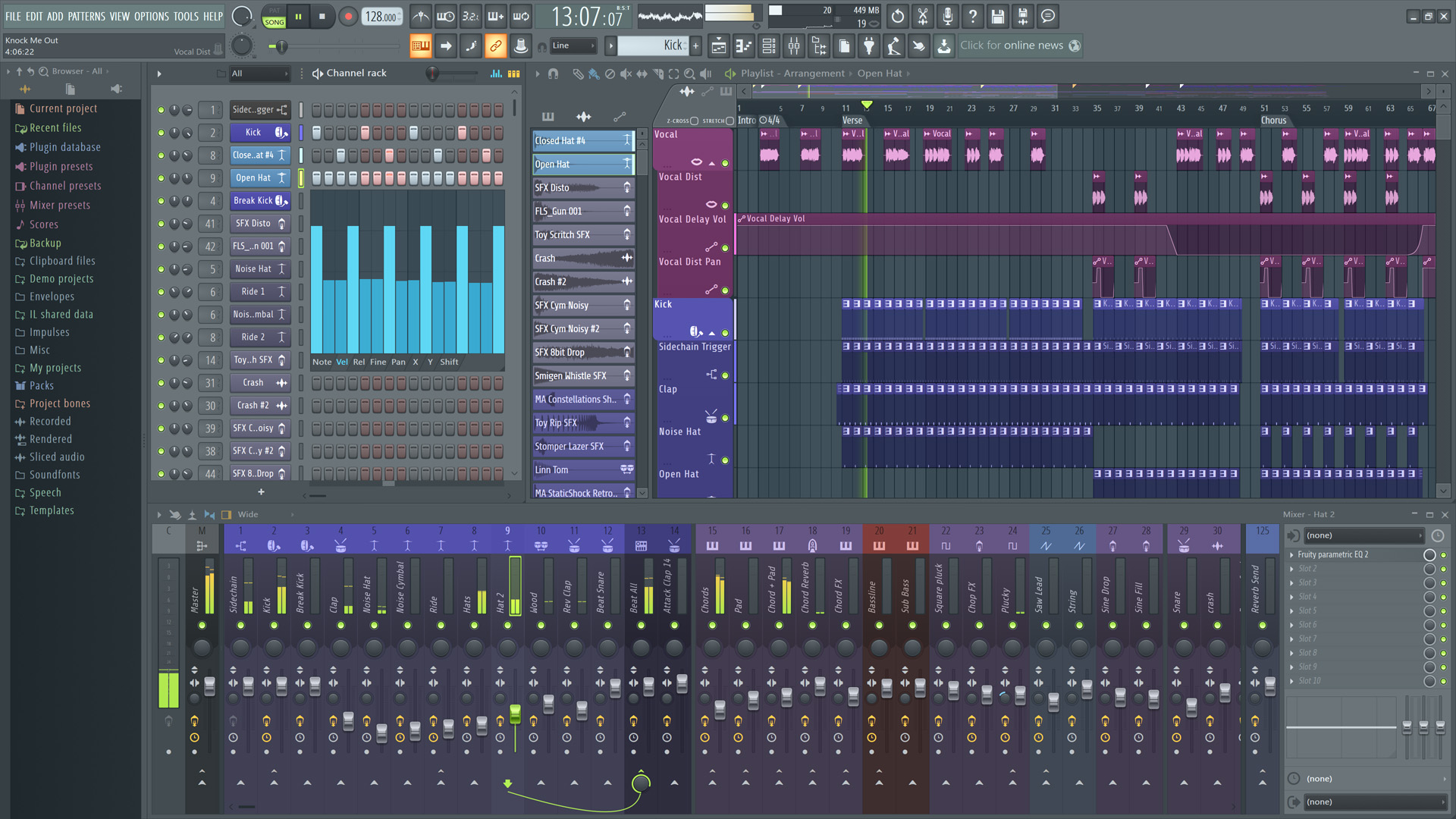 It oozes experimentation and a free-form spirit many people are looking for in their creative endeavours. Version 20 brought a native 64-Bit version for Macs, making it a tempter for electronic producers on both platforms.

Universally renowned as the industry standard DAW, Pro Tools has been around since 1991 - initially available for Mac only but now dual-format. It's the go-to DAW for the majority of professional high-end studios, with a focus on audio recording and production for multitracking bands live and creating top-end mixes for the biggest artists in the business.

It's a stable and logical production environment which has developed it's MIDI implementation greatly in recent years and expanded its scope of possibilities with features like cloud collaboration, which allows users to share projects safely online with each other. 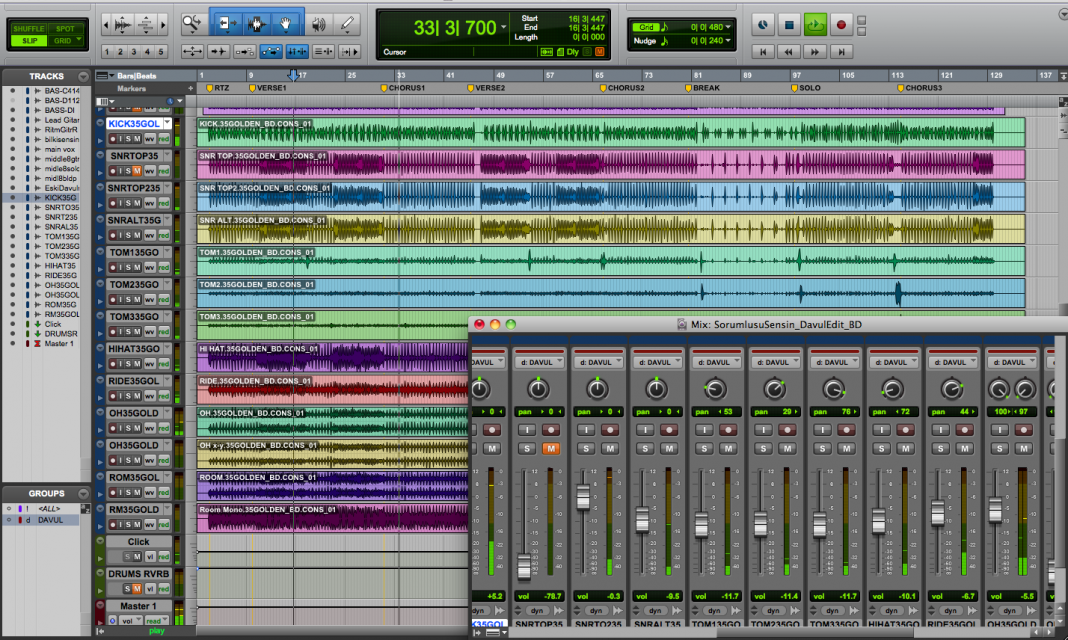 If you're aiming for the top, it's difficult not to recommend Pro Tools, though it may not be the most inviting choice for those new to music production.

Reaper is a superb entry point into music making, as one of the most affordable and lightweight DAWs on the planet. It's packed with customisation features like user created skins and is extremely efficient on resources - stable on older machines even with multiple effects and tracks. It's one of the most affordable DAWs on this list, with a very small computational footprint and comes with a good selection of native effects out of the box. 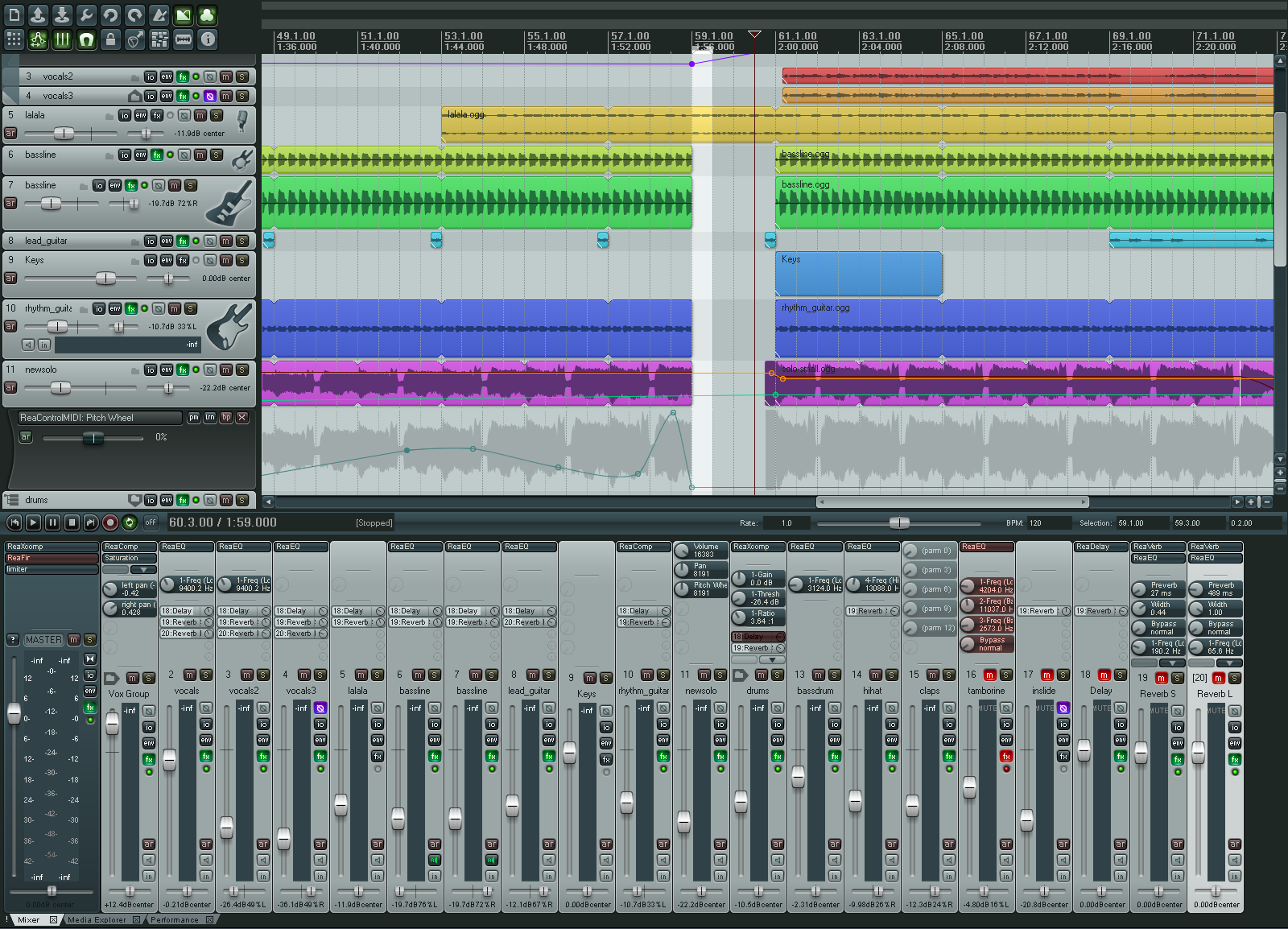 The relative new kid on the block, Bitwig is developed by ex-Ableton employees who have implemented many features which will appeal to live performers. It has a flexible modulation environment, allowing for unlimited routing and modulation options between plugins - whether they're native or third party. While it isn't the cheapest option on this list, it has a large and dedicated following which swear by its ambitious audio environment and favourable learning curve. 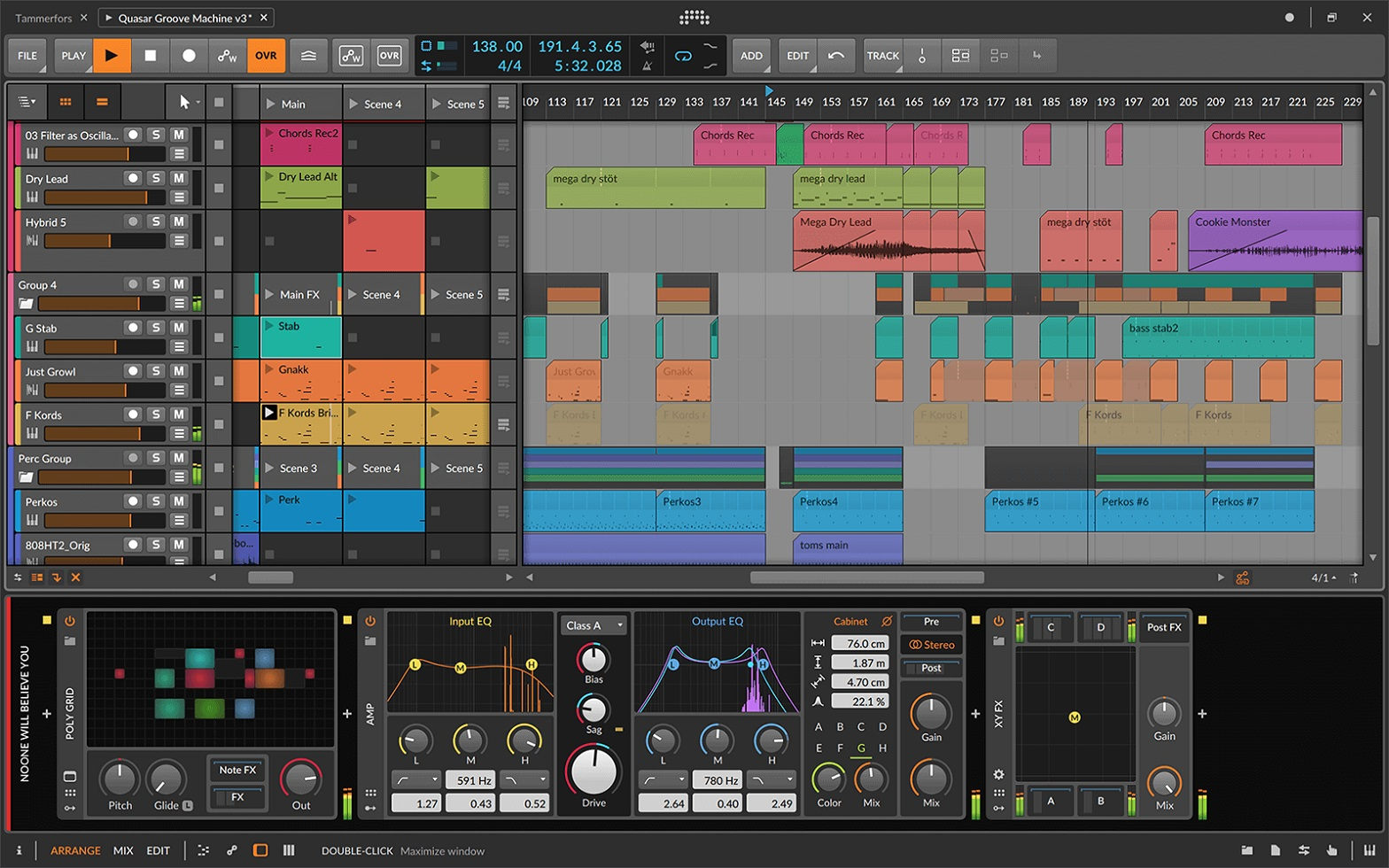 The tracker started out life in the chipmusic world on early computers and retro gaming consoles. Renoise takes the tracker ethos and workflow and brings it into the modern world - with audio recording, VSTs and an incredible level of modulation options. Each time you purchase Renoise you're entitled to the following 10 updates, which usually last a good few years. 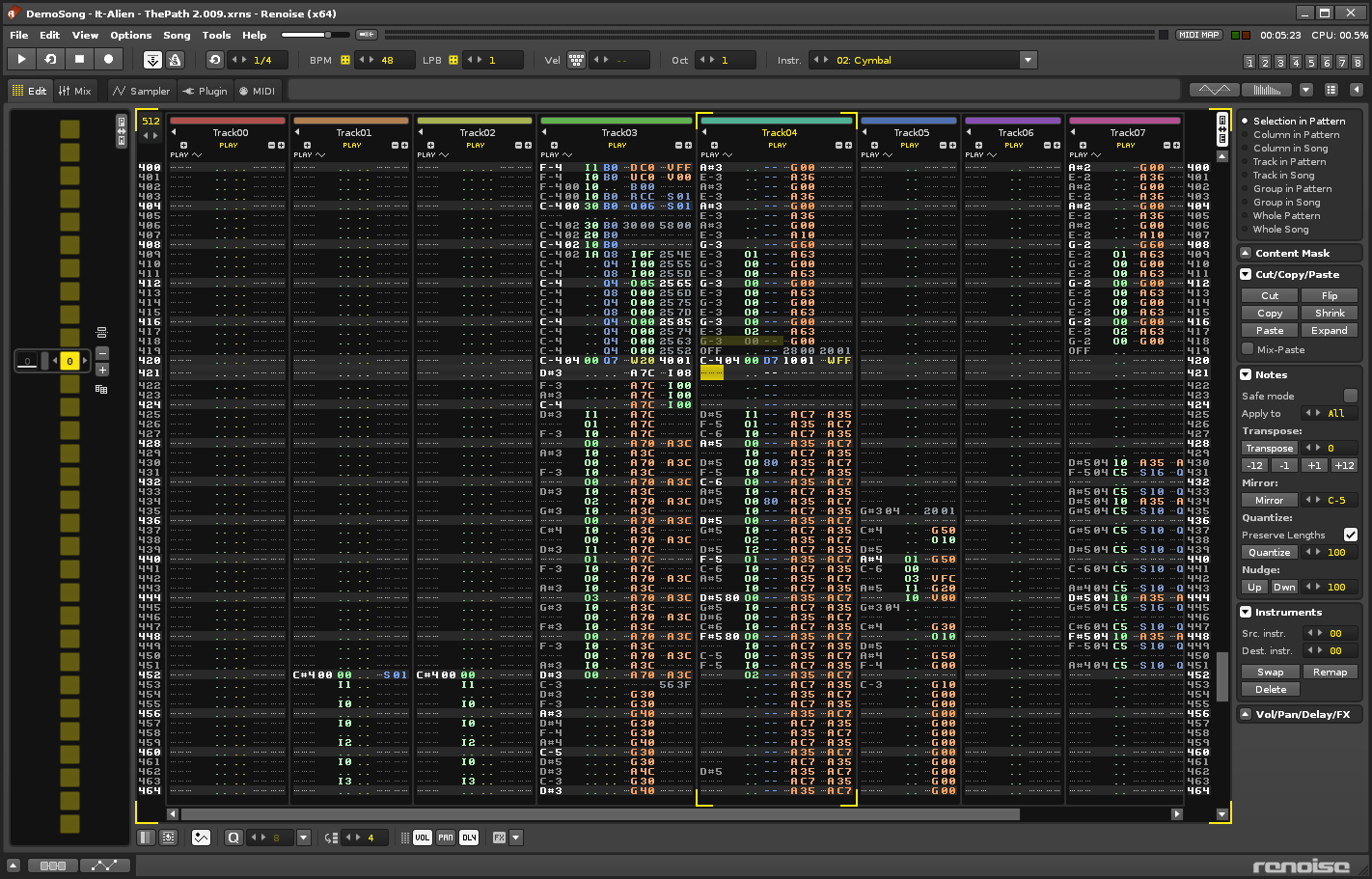 It's top-down playback and hexadecimal values give it the steepest learning curve of any of the DAWs on this list, but it's sample manipulation capabilities alone make it well worth the time. It's also available as a VST plugin called Redux which gives access to otherwise impossible features elsewhere.

Garageband - A free entry-level daw for Mac with superb royalty free sounds to get you started, and compatibility with Logic if you choose to upgrade. (FREE)

Cakewalk - A free windows-only reincarnation of SONAR Platinum with Melodyne integrated and lots of features for vocal processing, drum sequencing and production. ($49-499)

Mixcraft - Hailed as 'Garageband for Windows', Mixcraft offers a wealth of features including integrated Melodyne tuning. ($75-149).

Which DAW do you use? What made you settle on it? We'd love to hear your choices.

All prices correct at time of going to press. Some producers may use a number of DAWs.