Back in 2015, a little-known company from Greece called "Crazy Tube Circuits" released what would go on to be described by some people as "The Strymon Killer".

Their small reverb pedal, the Splash mkIII, featured just three settings - an "excite" setting, a hall setting, and a spring setting - and just four tweakable parameters, but due to the beautiful "excite" setting, it somehow managed to gain a reputation as a legitimate competitor to the Strymon Big Sky.

You can see the two pedals head to head here:

The Splash cost far less than the Big Sky, but there was one thing that stopped a lot of people - particularly keyboard and synth players - from taking the plunge... it didn't have stereo input/output, and the dreamy reverb effects were subsequently only in mono.

Crazy Tube Circuits have contacted SonicState to say that at NAMM 2017, they will be releasing a new pedal called the Splash mkIII Stereo Plus, which should be music to the ears of keyboard players and guitarists alike.

Here's a glimpse at the top panel: 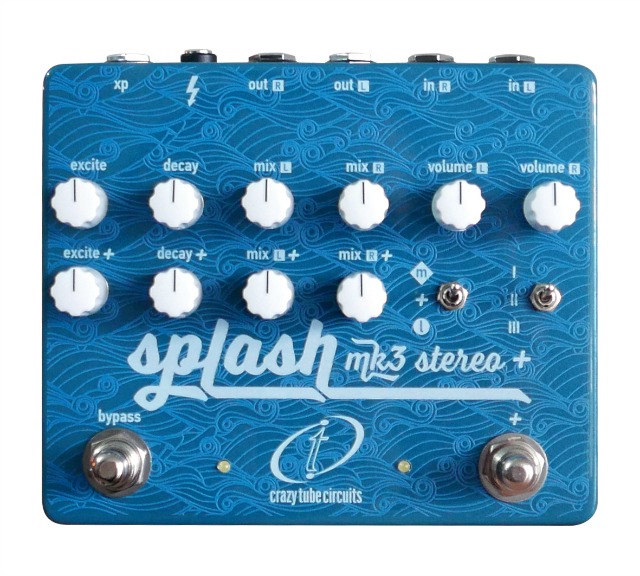 As well as separate mix and level controls for each channel, you can also choose momentary or latching operation.

You may also notice there are a set of parameters labelled "+", this allows you to use the same preset, but with two different sets of parameters. So if you want a short decay in the verse of your song, and a longer decay in the chorus, you can set up both of these patches and switch between them with a footswitch.

You can briefly hear the pedal in action here:

Chris Ntaifotis, the man behind Crazy Tube Circuits, told Sonicstate: "A lot of our customers asked for a stereo version of the Splash. I took the presets we used on the mono version of the pedal, and turned them into stereo presets."

There is one small change, however.

"I've only added a little extra decay on preset III, to be almost infinite like preset I," Chris told us.

If you're at NAMM this year, you can check out the pedal for yourself in Hall E, Booth 1484.