On the eve of the 35th anniversary of the groundbreaking Roland TR-808 drum machine, the global music community has come together to honor the iconic instrument that changed the face of music and to celebrate the countless artists who have been inspired by it. The events take place this month on what's been dubbed 808 Day, occurring, naturally, on 08/08. Festivities can be tracked on social media with the hashtag #808day. Here's what's happening:

Independent film producers have unveiled 808: The Movie, a documentary recounting the enormous influence the TR-808 has had on music and pop culture since the 1980s. The film, which is expected for general release this fall, has been screening in key cities around the globe. It features appearances by a diverse lineup of artists and producers, including Afrika Bambaataa, Fatboy Slim, Rick Rubin, Phil Collins, Questlove, David Guetta and many others. The next screening event will take place on 808 Day in London. Watch the movie trailer.

Low End Theory is an influential, world-renowned L.A. nightclub that pushes the boundaries of experimental music (jazz, electronic, hip-hop) and is a breeding ground for emerging artists, producers and DJs. Their second annual Low End Theory Festival 2015 will take place on 08/08 this year, in celebration of 808 Day. The festival will feature live music headliners such as Flying Lotus, Earl Sweatshirt (of Odd Future), Nosaj Thing, Daedelus, jazz bassist Thundercat and others. There will also be production workshops where artists will share beat-making techniques and Roland synth demos, as well as Roland-sponsored gear and t-shirt giveaways and other surprises throughout the day. For more info, visit their Facebook page.

Cutting-edge electronic music production and DJ school, Dubspot, is celebrating 808 Day on their New York and L.A. campuses. In celebration of the TR that started it all – The legendary TR-808 – they're inviting all musicians to participate in a set of beat production workshops, hands-on demos, artist performances, discounts on Roland TR-8s, special gear giveaways and more!  For details, visit the Dubspot Events page.

Kerry Brown, a multi-instrumentalist, artist manager, record producer, engineer, composer and founding member of L.A.'s Six01 artist collective, is sponsoring 8.08!, an evening event at the Six01 Studio Sound Lab, featuring live musical performances from David J (Bauhaus, Love and Rockets), Bon Harris (Nitzer Ebb), Brian Liesegang (Nine Inch Nails, Filter), and Kerry Brown (Catherine), as well as an art exhibition by CANTSTOPGOODBOY and Serj Tankian (System of a Down). "The 808 was a pivotal instrument that changed the course of music history," stated Brown. "It can be heard on so many iconic tracks and was a tremendous influence in my music and in many of my artists' careers. In honor of the anniversary of the 808 and my relationship with Roland, I thought I would hold an event to pay tribute to this instrument and the artists who have used it over the years." More details can be found on the Six01 Facebook page.

The Roland TR-808 was one of the first widely available – and more affordable – programmable drum machines on the market in the early 1980s. Its signature kick drum and snare sounds, as well as its "space age" sounds, became the centerpiece of the hip-hop and techno movements. The "808," as it was nicknamed, wound up being embraced by artists and producers of many genres on thousands of dance tracks and hit records. It has also been directly referenced in the lyrics of numerous songs spanning the last few decades. Despite the growing inclination for some artists to create music partially or exclusively with software these days, the TR-808 still reigns supreme for many, a fact that has been recognized by the Roland Corporation, who launched the TR-8 at the end of 2014, to bring the legendary "808 sound" to today's new generation of musicians. 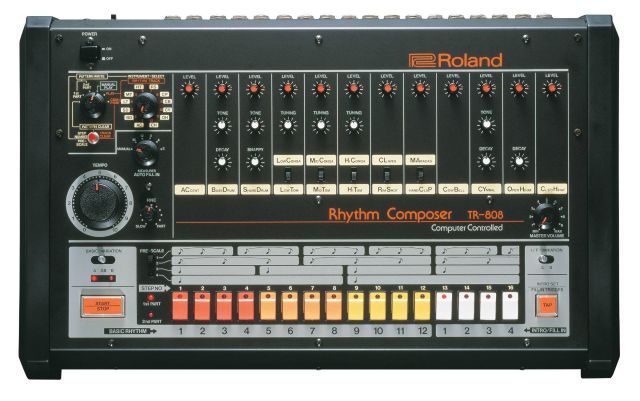