To continue the celebration of their 30th Anniversary, PRS Guitars is announcing two new limited edition models: the 30th Anniversary "Lefty" Custom 24 and the 30th Anniversary SE Custom 24 with flame maple veneer. They say that these two models proudly celebrate the quality, innovation, and history of PRS Guitars through the Custom 24 platform. A spokesperson told us, "The Custom 24 is the original PRS - it defines the playability and tone that PRS guitars are known for and has been a constant favorite of players worldwide ever since its official introduction in 1985."

Here's the details direct from PRS:

The 30th Anniversary "Lefty" Custom 24 features a maple top, mahogany back, mahogany neck, rosewood fretboard, Mother of Pearl 30th Anniversary bird inlays, the PRS 5-way blade switch, and the new 85/15 treble and bass pickups. Designed personally by Paul Reed Smith in conjunction with the new 58/15 pickups for PRS's 30th Anniversary year, 85/15's are uncovered pickups with remarkable clarity and extended high and low end perfect for more modern applications. This blend of tradition and innovation mirrors the culture that PRS developed over the last three decades. Fewer than 200 of these left-handed guitars will be made.

The SE line was established in 2001 with the goal of providing players with high-quality, reliable instruments. Featuring HFS treble and Vintage bass pickups, volume and a push/pull tone control with a 3-way blade pickup selector, this guitar offers a versatile array of PRS tones from a classic era. The addition of PRS's patented tremolo design and a wide thin maple neck give the SE 30th Anniversary Custom 24 addictive playability. 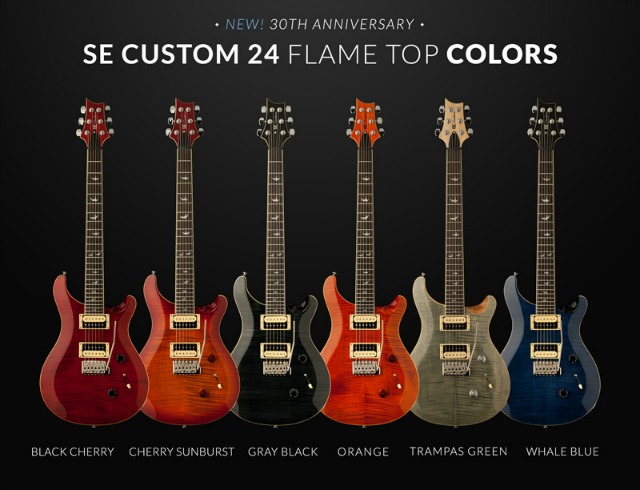 The 30th Anniversary "Lefty" Custom 24 is now being run through the PRS Core production line in Stevensville, Maryland.