PRS Guitars has announced the Dustie Waring Limited Edition. This is what they have to say...

The progressive metal band, Between the Buried and Me has a sound that is both heavy and melodic, lush and menacing - a tone that rhythm guitarist Dustie Waring achieves with PRS guitars and amplifiers.

Since 2008, Waring has traditionally used a PRS Custom 24 outfitted with a Floyd Rose tremolo system. This limited edition signature model takes the PRS Custom 24 'Floyd' platform and adds some unique features that Dustie specified to make his perfect PRS, including Dustie Waring signature DiMarzio humbucking pickups. Waring's signature pickups were designed to cover the spectrum from pristine cleans to heavy rhythm chords all with no harsh trebles or mushy bottom end. Paired with black hardware and a satin finish, these guitars have a look that is as sophisticated and menacing as Waring's tone.

Dustie Waring had this to say, "PRS guitars are something you can be proud to own. They're simply incredible! But aside from the amazing looks, crazy playability and super thick sound; the company believes in what they're building and put everything into it. There's no sacrifice in any part of the build, it's 100% all the way. There's a family vibe at PRS and it shows in every product. For what I do in BTBAM and my other projects, they're the perfect guitars for me. I can't see myself playing anything else. They are perfect instruments that you can get any tone you want out of, and they look absolutely badass." 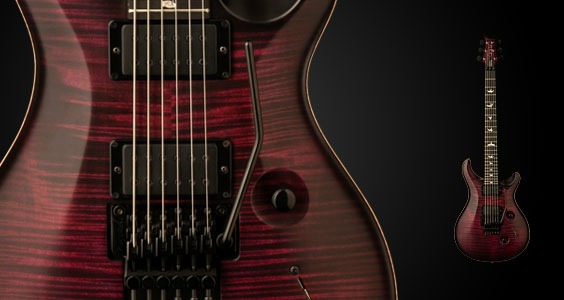 Pricing and Availability:
There is no cap to the number of Dustie Waring signature guitars that will be made, but the order window is limited to October 8, through December 15, 2014. Contact your Authorized PRS Dealer to place your order.

More From: PRS
Even more news...