Three Reasons You Should Play Guitar Whilst Watching TV

TV rots the mind, and that's great for playing guitar. Honestly. To help you see where I'm going with this, I'll give you three reasons why you should play your guitar while watching your favourite TV show.

I can tell you're still apprehensive. That's fine. But playing guitar in front of a TV will improve your muscle memory. Grab your axe, turn the box on, and just play acoustically for a while. You'll notice that you're paying no attention to what your hands are doing, and this is actually really good. Television really does put people into a vegetative state of mind, because it grabs the attention of your eyes and your ears.

My old guitar teacher, Mike Alexander, once told me to do this, so I plugged my guitar into my laptop and recorded what I was doing (with the laptop muted). It took me a while to properly zone out, I think I ended up watching Voyager. When the adverts came on I stopped concentrating on the TV, and listening back to what I'd done I was impressed, I'd gone through 7 modal scales, and started playing around with the modes in the key of (can't remember which key it was). The point is, that I was only just learning modal theory as a young wannabe shredder (that's behind me now), and I'd managed to prove to myself that I did know my scales really well. Obviously I subconsciously knew what I was doing all along, and because this process spawned from beneath my conscious level of thought, I'd ingrained the scale shapes deep within my head... somewhere.

If you've been taught guitar, or even taught yourself by listening to other guitarist's music, you will have a set of go-to riffs, scales, chord patterns and even techniques. When you sit down with your guitar to write something new, it's really hard to break out of this, and musicians like George Harrison even travelled to the other side of the world to try and pick up something fresh. Sometimes you can get inspired by a sound you've found on a pedal or an amp, and sometimes you get inspired by other music around you.

I get inspired less often than I get writer's block, so the first thing I do is turn on the TV, pick up a guitar, and just play anything. Start off with some simple warm-ups, then I slowly zone out and get engrossed in what I'm watching. If I record what I'm playing on the guitar, and then listen back to it, I usually find that I've played a couple of really cool sounding licks that I might not have usually played. Whilst this isn't exactly a foolproof method of coming up with something awesome, you'd be surprised at how creative you are when you aren't being creative. This applies to anything, you sometimes have to distract yourself into your creative state of mind. A lecturer at uni once told me that the only way to be truly original was to seal a child in a room with no windows at birth and give him a bunch of tools and materials, and see what instrument he/she would make, and how they would play it. I disagree wholeheartedly, I just prefer to try not to think about creativity, and then it seems to flow better. 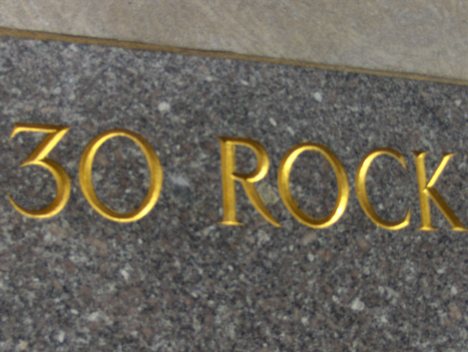 Okay, so finally, TV is great. And so is guitar, combining the two is like a double-header of procrastination and practise. The idea that I can be entertained whilst also improving as a musician is a novel one. So before you slam this idea, and call me a slacker, try it. Just don't misunderstand what I'm saying here and turn out like this guy: